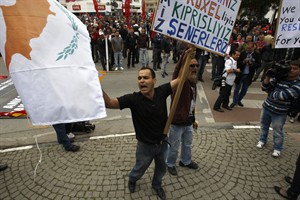 The Trade Union platform, planned protest, that took place today outside the Turkish Cypriot ‘parliament’ paled in comparison to the previous two attempts. About two to three thousand Turkish Cypriots with a few banners gathered outside the ‘parliament’ building. The reason for the small turnover is the fact that the political parties of the parliamentary opposition did not participate or support the movement out of fear of losing their voters in future elections.