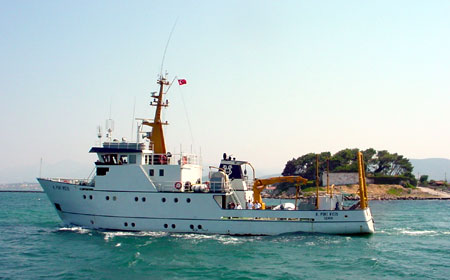 Around 11am yesterday, the Turkish seismographic vessel Piri Reis and two Turkish warships came into close range (around 10-15km) to the Noble Energy platform south of Cyprus while in some occasions even entered plot 12. In the meantime, two Turkish F16 jets were flying over the area. The activity was being monitored by a US, a British, a Russian and a Greek warship. Moreover there is information about the presence of Israeli Navy in the area. Unconfirmed information indicates that Piri Reis was driven out of the Plot 12 area by the foreign warships which if found to be true means that the international community is sending a clear message to Ankara.

The Greek National Defence General believes that the announcement having Piri Reis investigating the area is part of Turkish propaganda and only for internal consumption, since the particular vessel is old and not adequately equipped for the task. Turkey in the meantime has leased three more advanced research vessels from a Norwegian company and are already heading to Mediterranean. The Cypriot government has been assured by Norway that they support Cyprus’s sovereign rights to carry out investigations.